Meetings are held on the 1st. Wednesday of each month at 7.00pm. The next planned meeting will be in September. For further information call Betty Cowan 01773 822774 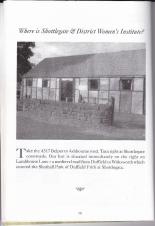 1918 was a year of great significance for women, both nationally and locally. Nationally married women over 30 years who met a property qualification were allowed to vote; and locally Shottlegate & District WI was formed.

The inaugural meeting was held on March 7th 1918 at the home of Mrs. Holden, a founder member – Shottle Gate Farm – and we held our Centennial Lunch in celebration at Blackbrook ouseHouse on the very same date this year, 2018.

The first meeting was held on 10th April 1918 at 3.00 pm – Mrs. Wheatcroft of Shottle Hall being the first President – later becoming the first County Chairman. It was suggested that each member should bring a cup, saucer and spoon to be left at the local Lecture Room for use at meetings. There was a demonstration of War Cookery and six small rabbits were sold and orders for 8 more were taken. The Board of Agriculture & Fisheries provided information on preserving eggs and potato growing. Demonstrations were held in canning fruit and vegetables. A canner could be hired for 2/6d. per day, 3d. each was charged for cans and an extra 1d. if the institute be responsible for the solder. Toy making demonstrations were held. It was explained that an effort was being made throughout the country to establish a toy making industry in our country villages so that when the war was over Germany would not be able to recapture her former trade of which she had a monopoly!

The first meetings were held in the Lecture Room but the combination of the fact that the `caretaker, Mrs. Slaney, requested more money for her services, and the room was being used as a place of worship on Sundays, plus the question of cleaning, the use of the room was causing some concern. Mrs. Wheatcroft broached the idea of the erection of a Hut. After much discussion with Mr. Hunter, Land Agent for G.H. Strutt Esq. It was agreed to rent the necessary land for 15/-d. per annum. Therefore a WW1 ex-army Hut was purchased and erected for the sum of £80.00. The official opening was held on 19th December 1923. Each member was asked to give a chair to provide seating. In January 1924 a discussion took place as to whether it was advisable to allow the men in the district to use the Hut as a club. It was decided that the men should be allowed to use the Hut but no-one under the age of 16 to be admitted.

During this time Mrs. Shirley was an invaluable member and was usually asked to be delegate at meetings because her husband was Station Master at Shottle Station which enabled her to have free travel.

An unusual competition in the 1930s was in the form of a challenge to discover which member could get the best crop from one 5oz. seed potato. The winner was Mrs. Pearce with 21 lbs. From 18 potatoes 98lbs. 7oz. were grown and these were sent to Derby Children's Hospital.

In May 1932 a library was formed for public use. Major alterations to the Hut took place in 1933 in the form of a kitchen and cloakroom being added. Further improvements in 1938 – electric lighting was installed.

With the advent of the Second World War in September 1939 the members set up a jam making process and by the end of 1943 1,288 lbs. of jam had been made at the Hut, plus 273 bottles of fruit. At last Mr. Strutt agreed to sell the land instead of renting at a cost of £75.00. The institutes war effort raised £960 for the Red Cross, and each returning member of the Services living in the district received 10gns. 1,00garments were knitted and sent to the Forces.

It wasn't until 1953 that piped water was available - previously to this 2 buckets of water were obtained from the well at Bye Ways - and a second-hand toilet was purchased from Mrs. Theaker for a price of not more than £2.00 including transport. (Prior to this - a bucket w.c).

In 1962 a sign of the times and an affluent society, was the seeking of planning consent for a car park – avoiding the unreliability of the local bus service. During the war this space was used for allotments.

1989 brought major repair problems to the Hut. After a survey it was suggested that a lighter weight roof to replace the rotting asbestos would give a new lease of life to the Hut. £1,500 was needed so with WI spirit and determination £2,000 was raised in 13 months, and each member was asked to take home one old wooden chair to renovate. These were replaced in 1998 – our 80th anniversary year – with the purchase of 40 smart new green stacking chairs.

In 1992 12 enthusiastic members agreed to form a Slimming Club. This could be considered Shottlegate & District's only failure! Some people did well – others not so well – some even weighing more when they finished than when they started!

In 1997 members took part for the first time in Belper's Well Dressing Festival – the first of several successes over the years.

To celebrate the Millennium a committee was formed with the purpose of putting on record a full history of Shottlegate & District WI. The resulting book proved to be a great success.

2015 – this being the Centennial Year of the WI Movement - so to mark this it was time once again to up-grade the kitchen facilities and replace the 1953 secondhand toilet - when we had a new toilet with heated hand-wash, new sink unit also with heated hand-wash, modern floor covering including the Committee Room and the whole decorated in a pleasant shade of apple green. We supported Smalls for All charity run by ACWW by supplying 40 dozen undies (by the generosity of local firm Slenderella). Subsequently we got a mention & photograph in WI Life.

May 2016 – we celebrated the Queen's 90th Birthday with afternoon tea at the Lion Hotel. Member Jean Crane (( also in her 90th year) was invited to Derbyshire House to attend the Celebration Tea Party.otelHotHoty

In October - We held a Coffee Morning at Slenderella's premises in Aid of Alzheimer's Society and raised £475.35. December saw the sad loss of long service member Ann Spendlove.

2018 has proved to be an eventful and enjoyable year, starting with our Celebration Lunch, we visited Nottingham to see the ballet Cinderella, and the Concert Hall for a live performance of War Horse. We attended the D.F.W.I Service of Thanksgiving at Derby Cathedral; their Exhibition of the Century at Chesterfield and took a trip on the Ecclebourne Valley Steam Railway, including a celebration tea. Now we continue our Thanksgiving Celebrations at the Church of St. of Lawrence, Shottle. Our next outing is to The Lavender Fields, York, and close the year with a visit to Chatsworth House to view the Christmas decorationsousHo

It has always been a matter of amazement that Shottlegate & District WI was formed in the first place. The area of Shottlegate wasn't even a hamlet, and there are far more dwellings at the present time that in 1918. The fact that present members travel to meetings from Alderwasley, Fritchley Nether Heage Nottinghamshire, Duffield, Wirksworth, says much about our Institute and its membership – and should our predecessors be watching over us, trust that they are satisfied with the continued success Shottlegate & District WI in 2018.

Now we look forward to our continual success at Shottlegate & District WI.

But on a more serious note – in conclusion it's ludicrous to think that the formation of WI's in this country was met with disapproval from the husband's of prospective members – they considered their wife's place was in the care of home and family; and here we are 100 years on supporting a charity dealing with domestic violence and sexual abuse.